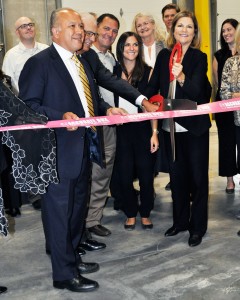 Accurate Box is currently undergoing a 200,000+ square foot expansion project expected to be completed in Fall 2017 that will foster continued growth and increased employment.

Paterson, New Jersey- September 29, 2016- Throughout generations of history, Accurate Box Company, a manufacturer of high graphic corrugated packaging, has made every effort to offer ways to help sustain the economy through employment of the people of Paterson and its surrounding communities. In 2016, Accurate Box embarked on an expansion project consisting of more than 200,000 sq ft that will further contribute to the economic growth of the city of Paterson.

With this expansion project, Accurate Box has announced its commitment to maintain its residency in the Bunker Hill district of Paterson’s HUBzone and to increase the number of employees by 20-30% upon completion. “We have a wonderful, skilled workforce here. We are committed to the reinvestment of the company and the future of keeping Accurate Box as a family run business. We are happy to remain here and expand on this property as many of our employees live in Paterson,” states Lisa Hirsh.

The ribbon cutting ceremony not only celebrates the completion of phase 1 of a construction project, but also Accurate Box Company’s 33rd anniversary residing in the great city of Paterson. Accurate Box has called Paterson, NJ its home since 1983 and about 52% of its workforce reside in Paterson, including many 2nd and 3rd generation employees.

“The city of Paterson is happy to join with Accurate Box and employees in your success,” said Mayor Jose ‘Joey’ Torres.  “You have built a lasting legacy in Paterson and I’m hoping together we have what it takes to burnish that legacy for at least another 33 years.  Thanks for your support of Paterson, this is a partnership for the present and the future.”